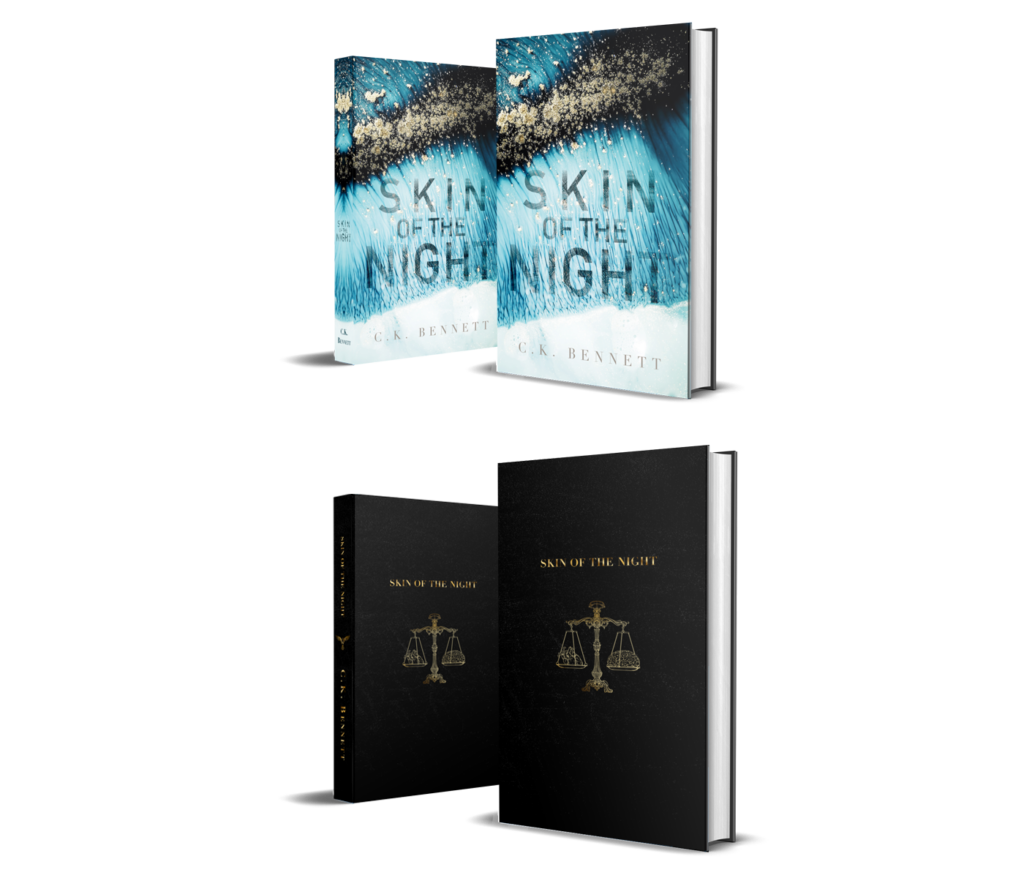 Above, you can see what the jacket for the hardcover looks like (the blue cover).

The black and gold design is the cover below the jacket.

First of all, I absolutely love how harmonious and seamless the jacket looks on the hardcover version. The artwork there is the beautiful design by Caracolla. By using this as the jacket, you’ll get the best of both covers.

As for the case beneath it, I wanted an elegant design that’s timeless (like the universe, which is unconfined by damsons of time). It was really important to me that it looked classy as well. So, black and gold was an ideal choice in my opinion, as gold is actually stardust, and often associated with the colour of stars. Black is also the darkness that surrounds them, and a colour frequently associated with the Night (yes, I capitalised that N).

Obvious choice the way I see it.

This is a theme that all the hardcovers will be following, so it was important to me that it was relatively neutral and could work for all the books, regardless of their content.

However, I also wanted a dark theme to pay our dear Mr Night the respect he deserves. Instead of going for a night sky (we all know I don’t like that straightforward approach for my covers), I took leather texture and made it black. Ultimately, I played around with it until the whiteness that comes from the creases in the leather resembled distant stars more so than anything else. This is very clear on the physical copy.

Now, as for the scales, one of the central symbols representing law is scales of justice, so I thought it was pertinent to use that. It was actually one of the ideas I considered for the paperback cover, too, so I’m thrilled I got to use it for the hardcover!

The scales are supposed to represent the justice system, and since our main characters work within the field of law, it seemed like a good idea to include them. William also puts Cara’s convictions on trial, so of course justice scales are apposite.

However, to allude to the theme of the book, I wanted something extra. The essence of the first book of The Night series is Cara’s dilemma: her head or her heart? So, I wanted justice scales with a heart on one side, and a brain on the other, to convey the message and Cara’s “trial”.

The text and the scales aren’t printed in gold foil, but it will look like it thanks to Photoshop.

Anyway, each hardcover book will have this design, although the object on the front will vary with each instalment. The object will be unique to every book, and will serve a symbolic purpose regarding the content.

I also added my logo to the spine. From the logo to my name will look the same on every book, but the title above it will obviously vary. This means it should look quite symmetrical in your bookshelves (I’m weak for symmetry, so this was important to me).